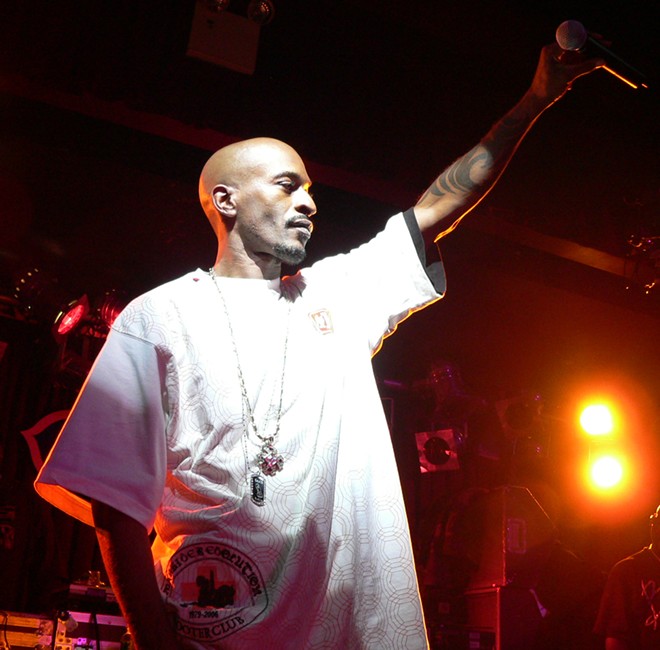 As hip-hop continues to be the most dominant musical force on the planet, it should be no surprise that there’s still a demand for live performances from the genre’s analog generation.

“We know the old-school genre is very popular here in the metropolitan Detroit area,” says Kearny, adding, “You get lyricism from Rakim, Slick Rick, and KRS-One. But you have a party when you think of ‘Treat ‘Em Right’ by Chubb Rock, and you have J.J. Fad’s ‘Supersonic’ song that’s still in heavy rotation on the radio.”

The Return of the Legends isn’t just a concert, but a fusion of 1980s and ’90s Detroit and east coast energy. There is a tribute to the late Detroit producer J Dilla planned, jit dancers performing with KRS-One, and performances by Motor City rappers Miz Korona and Supa Emcee.

Rakim, who’s still regarded by many as the greatest emcee of all time, attributes his staying power to spiritually and belief in himself.

“It’s all up to a higher blessing,” Rakim tells Metro Times. “I think I’ve done my part by staying true to my purpose, trying to deliver a conscious message to the listeners. And I’ve focused my energies on setting trends and not following them.”

All the artists have performed in Detroit in the past, going back to the Fresh Feast days.

“I remember doing a show at Chene Park many years ago, and the show was so incredible that the crowd came from the stands and was partying with me on the platform,” says Chubb Rock. “It was legendary.”

Rakim adds, “This will be my first time at the Russell Center, but the rejuvenated vibe of this place speaks a lot about Detroit and I know we gonna make some new memories.”

This will also be the first time KRS-One and Rakim have performed together in Detroit since 1988.

“You know, when Rick, KRS, and I share the stage, it’s like 1+1+1=100,” Rakim says. “We keep each other on the A game, so you know it’s gonna be that classic boom bap, but I got a few surprises to keep things fresh. You can expect that real hip-hop to crack your neck all night.”

The Return of the Legends starts at 8 p.m. on Saturday, April 9 at the Russell Industrial Center; 1600 Clay St., Detroit; russellindustrialcenter.com. Tickets start at $55 and are available from venuepilot.co.