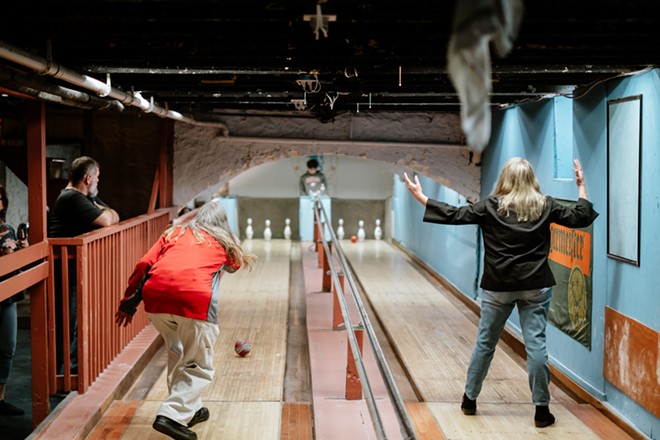 The Corner Bar’s cocked hat bowling lanes are the last of their kind.

When Jason Bibb needs to illustrate just how difficult it is to get into the Corner Bar’s (571 First Capitol Drive, St. Charles; 636-724-9060) legendary cocked-hat bowling league — a tradition that dates back to at least the 1940s, if not all the way back to 1875 — all he has to do is point to his own situation.

“I’ve owned this place for 17 years, and I’m not even on the Corner Bar’s team,” Bibb laughs. “We have some teams that have been going for 50 years; of course, the members are different, but the people on them can trace their roots back to when the teams started. You can’t get in until another drops out. The Corner Bar’s team has been full all this time. I still have to buy them their shirts though.”

Bibb knew he was inheriting such a deep tradition when he and his father bought the Corner Bar and its legendary lanes 17 years ago. More a piece of living history than a simple watering hole, the St. Charles bar has been a part of the city’s fabric since 1865. Originally founded as a saloon by the brother of Lindenwood University’s then dean, the building was initially called the Washington House and served as a tavern and short-term boarding house until the upstairs bedrooms were converted to military dorms for young boys. 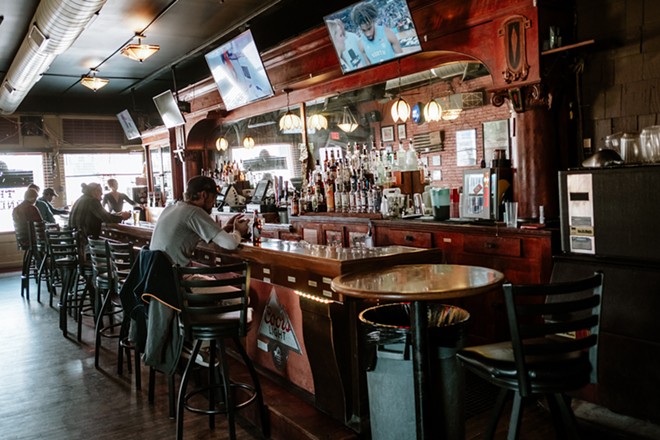 The Corner Bar has been in continual operation since 1865.

Despite the evolving needs of the upstairs quarters, the main floor bar quickly solidified itself as an area gathering place and public house, resting atop the lower level’s arched brick horse stables. Bibb does not know if the stables ever actually housed horses, but he is certain that they were converted to cocked-hat bowling lanes in 1875 so that patrons would have something to help them pass the time.

“Back then, you’d wear a cowboy or derby hat cocked to the side when you bowled, hence the name ‘cocked-hat bowling,'” Bibb says. “My understanding is that we are the only one left in the U.S. for sure, and likely the entire world, though we can’t prove that. Cocked-hat bowling came here from England, and there are these local places there that have been around forever. They don’t advertise, so it’s hard to know about them, but as far as we know, we are the only one left.”

Though the choice of headwear may have changed dramatically since the 1870s, the Corner Bar’s cocked-hat bowling lanes otherwise operate exactly as they have since their inception. The sport, played with three pins and a ball without holes called a candlepin ball, is still completely un-automated; Bibb employs pinsetters whose job it is to set the pins after every roll, which means people can’t simply head downstairs and bowl a game on a whim. It’s what gives the alley its mythical status.

“We have people stop in and want to bowl because they’ve heard about us, but it’s not that easy,” Bibb says. “I tell them it’s a pin-set system, not automated, and that I’d love to have them play, but there’s no pin-setter down there for them.”

Bibb never imagined he’d be making a living out of managing pin-setting and running the Corner Bar, though his connection with the historic bowling alley and pub is longstanding. A fifth-generation shoemaker, Bibb grew up going to the bar with his father, who lived around the corner from it when he was a kid. The place, as well as other old-school watering holes in the area, made an impact on both of them, and they would always make a point to seek out local dives when they traveled to and from New England for their work in the shoe business. Bibb admits that he dipped his toes into other lines of work, including the hospitality business, but it wasn’t until his dad called him up about 17 years ago with news that the Corner Bar was for sale that he considered the food and beverage industry as a long-term landing spot. That, as well of his desire to stop traveling for work as he settled down to have kids, pushed him to take the leap. 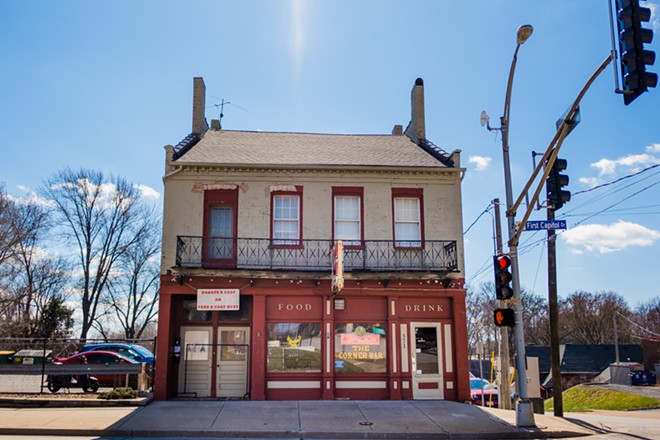 The Corner Bar is not just a St. Charles institution; it’s a piece of Missouri history.

“Quite honestly, I always tell people it’s been a love-hate relationship,” Bibb says. “I love it because I have a lot of friends there, and I tell people that the day you see a bouncer at the door is the day you know I no longer own it; that’s not the type of place I want to be. But because we are all so close, everybody wants to tell you how to do something. At the beginning, I used to feel like I wasn’t winning at shit, because everybody has a critique. But I got a thicker skin and learned that’s just the way people are going to be.”

Bibb understands that people feel compelled to put in their two cents out of genuine care for the bar. He knows that its patrons are invested in the place and, like him, see the Corner Bar as a dying breed in the midst of strip-mall establishments and large chain restaurants.

“People apologize when they call this a hole in the wall, but I tell them that’s OK because it just means we are a neighborhood bar,” Bibb says. “There aren’t that many of them left; this one sits alone in the middle of a neighborhood, catty-corner from a church and not on Main Street. St. Louis has a couple of places like this, but you have to know where to look. When you come in, you see someone you know, so it’s about connection. That’s why everyone was so worried when we came in that we were going to change it, but I am going to keep this as original and old-school as I can. That’s what people want of this place.”

Bibb admits that the past two years have been a challenge. While other eateries were able to transition to a carryout model, such a pivot was unthinkable. As he notes, the entire point of the Corner Bar is to come in, have a pint of beer and converse with the fellow patrons who are often as close as family. A push to convert his operations to a to-go business, even in the short term, would have changed the place’s essential character — something he notes might have given the bar a temporary lifeline, but would have been unsustainable in the long run because it’s not what his customers want.

His patrons recognized that, too; it’s why they did everything they could to support the Corner Bar as much as possible during its difficult stretch, which helped the iconic establishment weather the storm. Between that challenge, a couple of World Wars, Prohibition and the tail end of the Civil War, the place has seen it all — which is why a global pandemic didn’t make anyone flinch.

“This is like a club, but you don’t need a membership or card to get into it,” Bibb says. “People always ask me what I am going to do to keep things going, and my answer is, ‘Nothing.’ For some reason, our bar has survived and just keeps going. If anything, it’s thriving more than ever. That’s something I can’t explain. Each year, I think it’s going to be the year things fall apart, but each year, it keeps surprising me.”