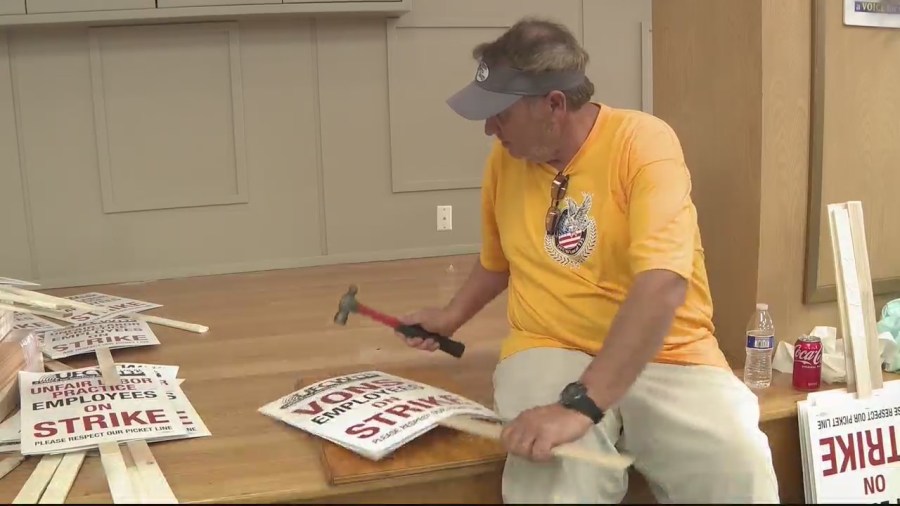 SAN DIEGO — Negotiations between labor unions and two grocery giants are back on Wednesday, but despite that, workers are still preparing to strike at a moment’s notice.

“We don’t want to, but we’re definitely ready if it comes to it,” said Davida Duenas, who works for Ralphs.

Grocery workers from the San Diego region gathered at the United Food and Commercial Workers local 135 in Mission Valley Wednesday afternoon, where a big sign-making event was held. Dozens of volunteered their time stapling, taping and hammering hundreds of signs together.

Negotiations involve Ralphs, Albertsons, Vons, Pavillions and labor unions stretching from central California all the way to the border, including all stores here in San Diego County. Nearly 50,000 grocery workers are affected.

“We are prepping for a work stoppage. We sure hope we don’t have to pull that card,” Vons worker Charles Willis said.

Union leaders say they are looking for a $5 per hour raise over the course of a three-year contract and increased safety standards after two years working through a pandemic. Current contracts expired early March and the last offer from grocery companies was a $1.80 raise over the course of those three years. Both Albertsons and Ralphs have said they’re committed to offering competitive pay.

“The CEOs of these companies are making billions of dollars and the rest of us are working paycheck to paycheck,” Willis said.

No official date has been set for a strike, but it has been voted on and authorized and workers are prepared to picket.

“If they don’t feel negotiations are going well enough, they can just call and let the companies know they’re going to go on strike,” said Bethyl Mitchell, who works for Vons.

Hundreds of signs were made Wednesday and union representatives say hundreds more are being printed. Negotiations could continue for up to five more days following Wednesday.