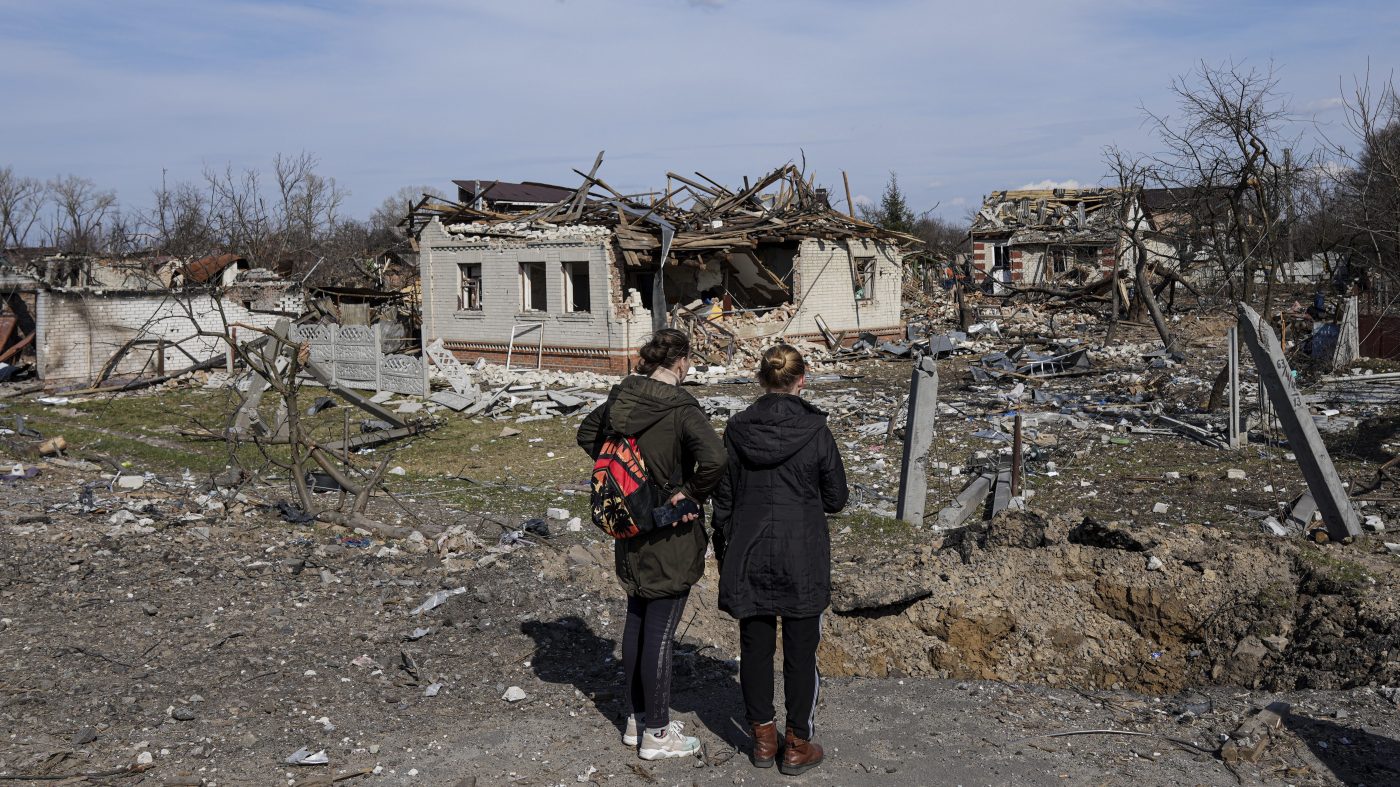 By ADAM SCHRECK and ANDREA ROSA

CHERNIHIV, Ukraine (AP) — Russian troops left behind crushed buildings, streets littered with destroyed cars and residents in dire need of food and other aid in a northern Ukrainian city, giving fuel to Kyiv’s calls Thursday for more Western support to help halt Moscow’s offensive before it refocuses on the country’s east.

Dozens of people lined up to receive loaves of bread, diapers and medicine from vans parked outside a shattered school now serving as an aid-distribution point in Chernihiv, which Russian forces besieged for weeks as part of their attempt to sweep south towards the capital before retreating.

The city’s streets are lined with shelled homes and apartment buildings, missing roofs or walls, and a chalk message on the blackboard in one classroom still reads: “Wednesday the 23rd of February — class work.”

Russia invaded the next day, launching a war that has seen more than 4 million Ukrainians flee the country, displaced millions more within it, and sent shockwaves through Europe and beyond.

Ukrainian Foreign Minister Dmytro Kuleba warned Thursday that despite a recent Russian pullback, the country remains vulnerable, pleading for “weapons, weapons and weapons” from NATO to face down the coming offensive in the east. Nations from the western alliance agreed to increase their supply of arms, spurred on by reports of atrocities by Russian forces in areas surrounding the capital, Kyiv.

Western allies also ramped up financial penalties aimed at Moscow, including a ban by the European Union on Russian coal imports and a U.S. move to suspend normal trade relations with Russia.

Kuleba encouraged Western countries to continue bearing down on Russia, suggesting that any let up will ultimately result in more suffering for Ukrainians.

“How many Buchas have to take place for you to impose sanctions?” Kuleba asked reporters, referring to a town near Kyiv where Associated Press journalists counted dozens of bodies, some burned, others apparently shot at close range or with their hands bound. “How many children, women, men, have to die – innocent lives have to be lost – for you to understand that you cannot allow sanctions fatigue, as we cannot allow fighting fatigue?”

Ukrainian officials said earlier this week that the bodies of 410 civilians were found in towns around the capital city. Volunteers have spent days collecting the corpses, and more were picked up in Bucha on Thursday.

Ukrainian and several Western leaders have blamed the massacres on Moscow’s troops, and the weekly Der Spiegel reported Thursday that Germany’s foreign intelligence agency had intercepted radio messages between Russian soldiers discussing the killings of civilians. Russia has falsely claimed that the scenes in Bucha were staged.

Kuleba became emotional while referring to the horrors in the town, telling reporters that they couldn’t understand “how it feels after seeing pictures from Bucha, talking to people who escaped, knowing that the person you know was raped four days in a row.”

His comments came in response to a reporter’s question about a video allegedly showing Ukrainian soldiers shooting a captured and wounded Russian soldier. He said he had not seen the video but that it would be investigated and acknowledged that there could be “isolated incidents” of violations.

The video has not been independently verified by the AP.

In the 6-week-old war, President Vladimir Putin’s forces have failed to take Ukraine’s capital quickly and achieve what Western countries said was the Russian leader’s initial aim of ousting the Ukrainian government. In the wake of that setback and heavy losses, Russia shifted its focus to the Donbas, a mostly Russian-speaking, industrial region in eastern Ukraine where Moscow-backed rebels have been fighting Ukrainian forces for eight years.

The United Nations’ humanitarian chief told the AP on Thursday that he’s “not optimistic” about securing a cease-fire after meeting with officials in Kyiv and in Moscow this week, underlining the lack of trust the two sides have for one another. He spoke hours after Russian Foreign Minister Sergey Lavrov accused Ukraine of backtracking on proposals it had made over Crimea and Ukraine’s military status.

It’s not clear how long it will take withdrawing Russian forces to redeploy, and Ukrainian officials have urged people in the country’s east to leave before the fighting intensifies there.

The head of Ukraine’s national railway system said Russian shelling already blocked the evacuation of residents from some eastern areas by train.

“The situation in Donbas is heating up and we understand that April will be quite hot, so those who have the opportunity to leave — women, children, the elderly — need to stay in a safe place,” Borys Filatov, the mayor of Dnipro, a city that lies just west of the Donbas, said at a briefing.

Even as Ukraine braced for a new phase of the war, Russia’s withdrawal brought some relief to Chernihiv, which lies near Ukraine’s northern border with Belarus and was cut off for weeks. But the departed troops left behind twisted buildings and traumatized residents, who clambered over rubble and passed cars destroyed by the fighting.

Vladimir Tarasovets, a resident, described nights during the siege when he watched the city on fire and listened to the sound of shelling.

“It was very hard, very hard. Every evening there were fires, it was scary to look at the city. In the evening, when it was dark, there was no light, no water, no gas, no amenities at all,” he said. “How did we go through it? I have no words to describe how we managed.”

Tatiana Nesterenko, who left Chernihiv for Medyka in Poland, said she spent 40 days hiding out in her basement.

”Our home was destroyed by an airstrike,” she said. “There was no help, no volunteers for us. We extinguished the fire by ourselves.”

Revulsion over the invasion of Ukraine grew stronger over the past week as images revealed what some Western leaders called war crimes in Bucha. In addition to spurring NATO countries to agree to send more arms, the revelations have led Western nations to step up sanctions, and the Group of Seven major world powers warned they will continue ramping up measures until Russian troops leave Ukraine.

Der Spiegel reported that individual radio messages dealing with the murder of civilians may be linked to pictures of bodies found in Bucha. The outlet reported that Germany’s BND intelligence agency informed lawmakers about this information Wednesday.

In one radio message, a Russian soldier reportedly informs another how he and others shot dead a person on a bicycle. In another message a speaker allegedly recounts how the Russian military interrogated enemy soldiers before killing them.

Mariupol has experienced some of the war’s greatest deprivations, and the mayor said Wednesday that more than 5,000 civilians have been killed there. Russian forces are fighting street by street to capture the city; doing so would allow it to secure a land corridor to the Crimean Peninsula, which Moscow seized from Ukraine in 2014.

Schreck reported from Kyiv, Ukraine. Associated Press journalists around the world contributed to this report.

Follow the AP’s coverage of the war at https://apnews.com/hub/russia-ukraine