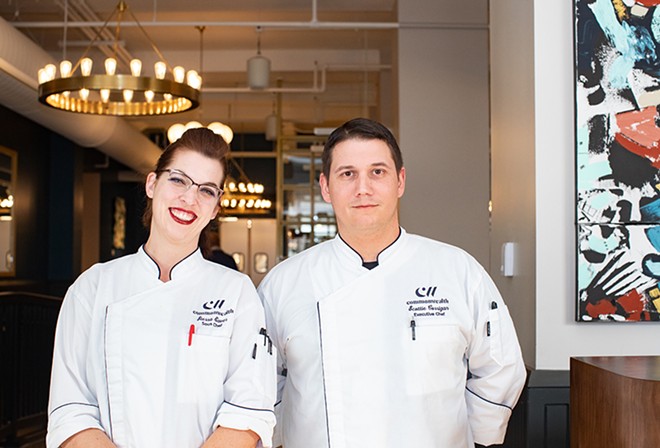 It takes four days to make Commonwealth’s Starry Night dessert — 96 hours of painstaking, technical work and patient waiting, where if even the smallest detail goes amiss, the entire thing falls apart. When all goes right, this effort results in a stunning, spherical mirror cake that shimmers with hues of metallic deep blue and violet so reflective you can see the outline of your face in it. Tapped with just the right amount of force, the glimmering, chocolate domed shell cracks apart, the fissures revealing a luxurious chocolate torte the texture of a brownie pulled out of the oven a few minutes early. Silken chocolate crème patisserie and blueberry compote coat and fill the interior cake; this mélange forms a bittersweet filling with just a hint of tang that makes you feel as if you are eating a one-of-a-kind piece of delicious, culinary art.

The Starry Night may be Commonwealth’s showstopper dessert, but more importantly, it captures the approach chef Scottie Corrigan is going for at the five-month-old culinary jewel of Grand Center’s Angad Arts Hotel. Since joining the property in April of last year, Corrigan — together with his sous chef Sierra Eaves — has doubled down on classic fine dining, a segment of the hospitality industry that has seen its obituary written over and over throughout the course of the pandemic. Unapologetic about what he is offering, the rigorous demands he places on his team of true believers and his refusal to change how he approaches upscale dining even in the face of external forces, Corrigan believes that Commonwealth (634 North Grand Boulevard, 314-405-3399) should stand as a timeless yet innovative beacon of fine dining that weathers, rather than bends to, the challenges of the moment.

Corrigan’s vision is bold, which is exactly what the owners of the Angad were looking for when they called him in to revamp the hotel’s former restaurant, Grand Tavern. Originally founded by David Burke when the Angad first opened in 2018, the restaurant generated significant buzz for its celebrity chef namesake, but it never lived up to the hype. The hotel and Burke ended their partnership in early 2020; then, March of that year happened and the Angad simply kept the ship as afloat as possible, tempering its grander ambitions for sheer survival as the property struggled and the surrounding theater district that supported its dining operations went dark.

When the rest of the world was focused on the promise of Hot Vax Summer 1.0, the Angad’s owners had their eyes fixed on revamping their dining operations. The hotel’s executive chef, Matt Birkenmeier, who was overseeing all of the property’s food and beverage services, brought on Corrigan to lead the charge in bringing the owners’ ambitious vision to life: a European-style restaurant influenced by the flavors of the numerous countries that make up the British Commonwealth. After several months of development, the newly minted Commonwealth opened last October; it didn’t take long, however, for Corrigan and company to realize that having such a vast and disparate organizing principle — and a very fraught one at that — was not the best idea. After a few months, he and his team nixed the British Commonwealth concept and narrowed their idea to a more classically European focus. 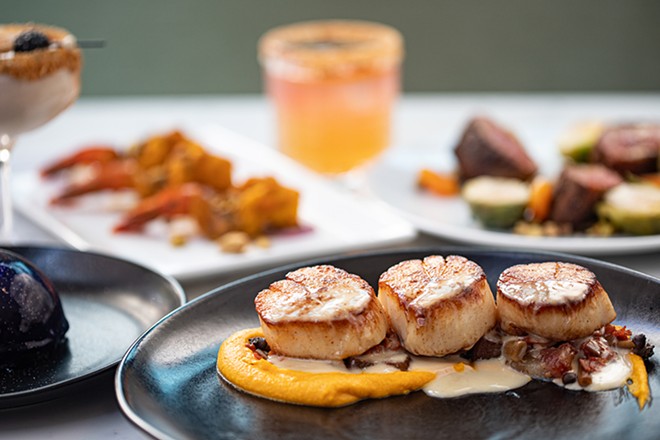 Corrigan seems happy to have shaken off the initial vision, and though he and his team bill the restaurant as European, he sees that as being more rooted in the French techniques and kitchen operations style that were drilled into him at culinary school rather than a set of particular dishes. This gives him a solid footing to deliver on such classics as a luscious camembert appetizer, baked into a puff pastry that is so flaky the buttery layers melt on the tongue. Sticky fig jam and honey, classic accoutrements for the preparation, cut through the cheese’s richness and Marcona almonds add texture to this quintessential dish.

More often than not, though, Corrigan and his team show that they use classical dishes and techniques as a foundation, then build upon it in more innovative ways. Instead of the traditional French-style mussels preparation of white wine and shallots, Commonwealth’s version embraces Southeast Asian flavors of mild curry and fragrant lemongrass that perfume the delicate tomato broth. The pork belly first course, too, teases a Persian and South Asian inflection; the luscious meat — so flawlessly cooked you can butter a biscuit with it — is encrusted with cardamom and fennel seed, cutting through the fatty meat with perfumed spice, and pomegranate mousse gilds the belly with a deep, subtly sweet-tart taste.

There is nothing subtle about the honey jalapeño bisque’s punch. The soup has a delicate viscosity, but that light texture disguises a wallop of spice that creeps up about five seconds into the first bite, then continues to light up the palate with fiery heat. The honey is there less to mitigate spice than to add a small dose of sweetness to balance the vegetal heat. It’s a brilliant interplay of flavors. 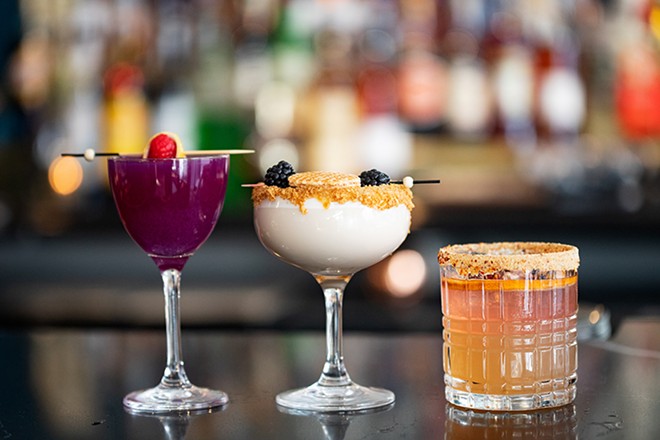 Commonwealth’s entrees are defined not by a particular style of cuisine, but rather by their common thread of spot-on cooking. Tandoori duck breast is a quizzically named entry; the bird is not cooked in a traditional clay oven and doesn’t have an obvious spice profile associated with the Punjabi dish. However, if you set that aside and enjoy it for what it is, you’ll be enraptured with several hunks of duck cooked to such a gorgeous medium rare they could be an encyclopedia entry for duck preparation. The juicy fowl is accented with dried apricots, cocoa “soil” and black lime pistachio; the combination of the chocolate and stone fruit adds depth to the duck, though the juicy meat is so stunning on its own, it could have been served up with no adornment and would still impress.

Cast-iron-seared scallops were equally well-prepared — buttery on the inside with a crisp, golden exterior. Anise-scented carrots and braised leeks are subtle accents, while lardons infuse the accompanying charred lemon beurre blanc with smoke and salt. Another flawlessly cooked entrée, the beef short rib, falls apart with barely the suggestion of a fork prod; I believe there was a blueberry reduction and celery root-potato puree on the plate, but I was so taken by the rib that all else failed to register.

Really, that short rib captures Commonwealth’s overarching strength: The kitchen is so good at cooking that, despite whatever other bells and whistles are on the plate, the technical aspects stand out as the star of the show. It will be exciting to see what Corrigan, Eaves and their team continue to create now that they are freed from the confines of the restaurant’s original founding concept. As they’ve proven with their signature dessert as well as their cooking skills, the sky is the limit.