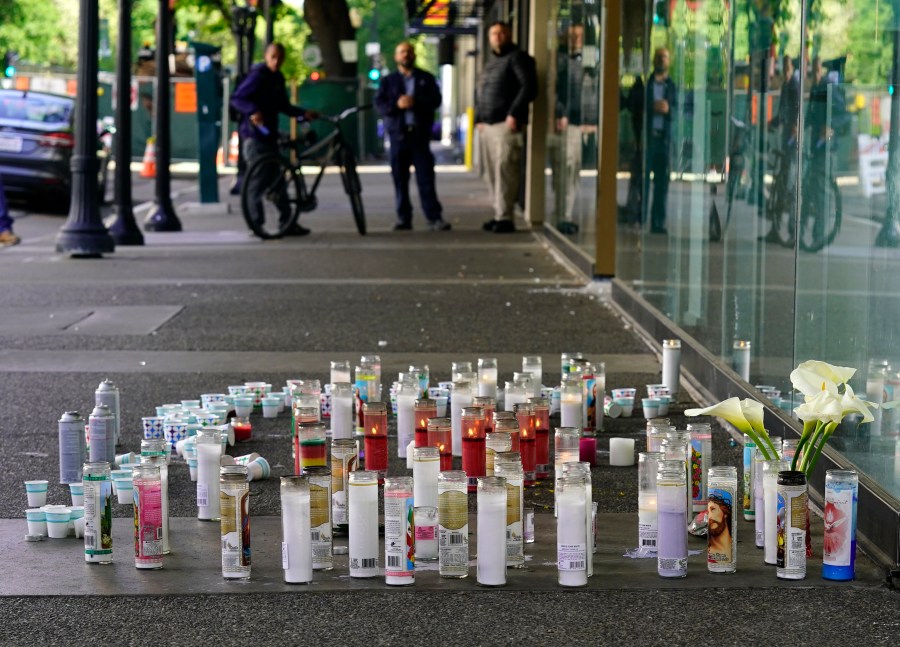 Police said they identified at least five gunmen but there may have been more. Only two suspects — both brothers wounded by gunfire — have been arrested in connection with the shooting and, so far, only face firearms charges.

“We’re still working through … who the actual shooters are in the case,” Sgt. Zach Eaton said.

Until Wednesday’s announcement, police had been silent on what led to the shooting that erupted early Sunday as bars were letting out. Rapid-fire bursts of over 100 gunshots echoed through the streets as terrified patrons ran for their lives and others were hit by bullets.

Police said at least two gangs were involved. They declined to provide more details or name the gangs involved or the affiliation of any suspects.

Experts said that if gangs were to blame, it would mark an unusually bloody feud.

In 20 years of researching gangs in Los Angeles, Alex Alonso said he can’t remember a gang-related shooting with such a high body count.

The location of the Sacramento shooting – in a bustling area of watering holes near the entertainment district — was incidental to whatever fueled the fight.

The large number of casualties was the result of high-capacity weapons in a crowded area, he said.

Berry Accius, founder of Voice of the Youth who leads gun intervention and prevention programs and offered his services to counsel families who lost loved ones in the shooting, criticized police for characterizing the crime as gang-related, which he said will lead some to “think Black people.”

He said people will see the photos of the Black women and men who were shot, assume they were in a gang and wonder why gang members are downtown.

“That’s the narrative we don’t need at this particular time,” Accius said. “This idea that we’re going to put blame to one demographic of folks and blame them for the violence that ensued.”

Bill Sanders, a criminologist at Cal State LA, said he wanted to see more evidence the shooting was gang-related, a term police often use to drum up support. He said gang shootings are more mundane and most occur in what are considered gang neighborhoods.

“If you looked at a map of gang homicides in the city — or any city — over time, you’d see the same areas lighting up — meaning that’s where they occur. If these guys were white, this wouldn’t be considered gang related — not even for a minute.”

Authorities credited witnesses who contributed nearly 200 videos, photos and other tips with helping the investigation.

Police were trying to determine if a stolen handgun found at the crime scene was used in the massacre. It had been converted to a weapon capable of automatic gunfire.

They are also investigating whether a gun one of the brothers, Smiley Martin, 27, brandished in a video was used in the shooting, a law enforcement official told The Associated Press. The official was briefed on the investigation but was not authorized to publicly discuss details and spoke on condition of anonymity.

Martin and his brother were among those wounded in the gunfire that erupted about 2 a.m. Sunday as bars closed and patrons filled the streets.

Ten people were wounded in addition to the Martin brothers. At least two remained hospitalized with gunshot wounds.

Smiley Martin faces charges of possession of a firearm by a prohibited person and possession of a machine gun. He remained hospitalized and it wasn’t clear if he had an attorney who could speak for him.

His brother, Dandrae Martin, 26, was arrested as a “related suspect” and appeared briefly Tuesday in Sacramento Superior Court on a charge of being a convict carrying a loaded gun.

He did not enter a plea and his attorney said she would wait to see if prosecutors brought more serious charges before deciding whether to seek his release.

Both men have criminal records. Smiley Martin was released from prison in February after serving about half of a 10-year prison sentence for beating a girlfriend. He was denied parole last year after prosecutors said he “clearly has little regard for human life,” documents show.

Sacramento Mayor Darrell Steinberg questioned why the brothers were on the streets.

“Those questions need to be answered and they will be answered over the days ahead,” Steinberg said.

A 31-year-old man seen carrying a handgun immediately after the shooting was arrested Tuesday on a weapons charge. Police said they don’t believe his gun was used in the shooting.