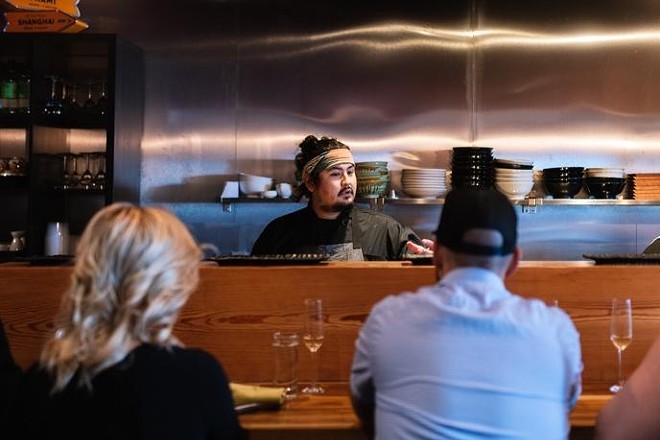 Nick Bognar and his family will open Sado on the Hill this fall.

Nick Bognar has heard St. Louis diners ask the same question over and over throughout his time in the area’s restaurant scene: Where do we get good sushi? Now, he’s hoping to definitely answer that query with the forthcoming restaurant, Sado, a new concept that will set the bar for Japanese dining in the metro area.

“The idea is for us to bring a focused sushi bar to St. Louis,” Bognar says. “Everybody is always talking about where to get great sushi in St. Louis, so we wanted to be that place — an easy-to-understand and easy-to-get-into sushi bar that when you say the word ‘sushi,’ you just stop there.”

If anyone is up to the task of defining the sushi genre in St. Louis, it’s Bognar. A highly-acclaimed chef who has received national recognition for his Tower Grove South restaurant, Indo, Bognar has been bringing diners some of the best raw fish the city has seen since returning to St. Louis in 2017. At that time, he found himself back at his parent’s Ballwin mainstay, Nippon Tei, after spending several years honing his culinary craft and sushi skills in both Austin, Texas and Cincinnati, Ohio. Determined to build upon the brand his parents started in 2001, Bognar transformed Nippon Tei from a beloved Japanese restaurant into a culinary powerhouse that garnered wide-ranging acclaim and earned him a James Beard Award nomination for Rising Star Chef of the year in 2019.

Bognar parlayed that success into his solo debut restaurant, Indo, which opened in 2019. Though raw fish has been central to Indo’s success, the restaurant is fundamentally a modern Thai restaurant with elements of Japanese cuisine woven into its menu. He describes the restaurant as creative and intentionally “all over the place,” so he sees Sado as a more focused, complimentary concept.

“Indo is pretty busy and it’s a small place,” Bognar explains. “It’s cool that this is a bigger spot that will hopefully be easier to get into, and we are going to leave space for walk-ins. It will be fresh and delicious with a plethora of things and will stretch from a place you can come and sit at the sushi bar on a Tuesday night to somewhere you can have a special occasion and something special on a Friday or Saturday night. We think we can offer all of those things in this one building.”

As for Nippon Tei, Bognar confirms that the 21-year-old Ballwin restaurant will be well represented at Sado, though will close in its current form by the time Sado opens, likely this Fall. However, he describes the situation as a move, not a closure.

“I think a lot of Nippon Tei’s base menu will be part of this new concept, but we will add to it in a subtle and focused way,” Bognar says. “I don’t see the menu as being massive, but I see us offering a lot of different things for a lot of different people. It’s going to be different from Indo; there are certain things we don’t have at Indo that I always grab a bite of when I’m at Nippon Tei. We will have California rolls on the menu. We will have crab rangoon. There are a lot of things you can say about crab rangoon, but it’s just delicious, and we want to have people stoked about these comfort dishes, but we will also have dishes that bring a higher-end feeling, too.”

In that spirit, Sado will offer tuna tartare, gyoza, a variety of maki and nigiri, as well as traditional Japanese tempura, which Bognar notes is a dying art. He is especially excited about the Japanese charcoal grill he’s building for the restaurant that will allow his to do a variety of open-fire cooking, including grilled dry-aged fish.

“There’s just something about Japanese charcoal and that high heat and cooking fish that way,” Bognar says. “It just feels like we are connecting to this ancient, primitive thing. It’s not done enough, and I am super excited to bring that to our repertoire.”

Bognar also reassures longtime Nippon Tei diners that his mom, Ann Bognar, will remain a vital part of this next phase of the restaurant she founded. As he explains, she will be contributing to the design of the space, the menu, and, most importantly, the overall hospitality, just in less of a day-to-day operations role.

“She is still going to be involved every step of the way,” Bognar says. “We are partners, and her insight is valuable in terms of design and development of the concept. She will be there to continue to bring her experience and knowledge, but hopefully she will be able to come and go as she pleases and get to enjoy the positive parts of owning a restaurant.”

Bognar is optimistic that Sado will be able to carry forth the legacy of Nippon Tei while moving the concept forward. He believes that, in doing so, he and his family are creating something special for St. Louis diners that, like its predecessor, will be a integral part of the area’s dining community for years to come.

“We are so excited and want this to be a place that all types of diners can enjoy,” Bognar says.