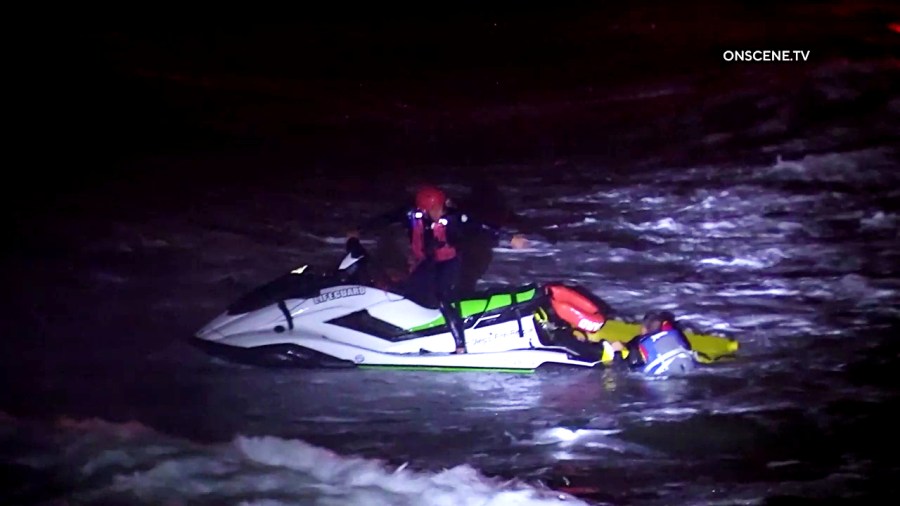 SAN DIEGO — A man died and others had to be rescued from rough surf near the Ocean Beach Pier early Saturday after what immigration officials believe was an attempt to enter the U.S. illegally.

The men’s boat overturned in the shore break around 12:45 a.m., a Customs and Border Protection spokesperson confirmed by email. It wasn’t immediately clear how many people were aboard the vessel.

Lifeguards, U.S. Coast Guard members and a CBP Air and Marine Operations agent were all involved in the effort to get the group out of the water. Video from OnScene TV showed authorities helping two men onto the beach.

That included a person who struggled to grab a board extended from a rescuer’s small watercraft as it bobbed in the crashing waves. Eventually, the man clambered aboard and was taken to land, video showed.

Elsewhere on the beach, lifeguards gave a man CPR on the sand. A resident told OnScene TV that he came down to the beach with his fishing pole and a flashlight after hearing the commotion, and that he saw the man lying on the sand near the water. He alerted rescuers, who rushed to help.

Despite lifeguards’ efforts, the man was pronounced dead at the scene, a San Diego Fire-Rescue spokesperson said by phone. The other two, and a third man who made it to land on his own, were all taken to a local hospital. That made it a total of four people known to rescuers.

A helicopter flew over the sea, shining a spotlight down on the crashing surf, and lifeguards searched the water by boat and personal watercraft in case there were others in the ocean. The search lasted around five hours before officials called it off, according to OnScene TV.

A small fishing boat, sometimes referred to as a panga, washed ashore at some point during the rescue effort. It sat overturned on the beach, and video showed immigration officials taking photos of it.

“At this time, all indications are that this was an attempt to enter the U.S. illegally at sea, but CBP does not have any additional information regarding (the group’s) nationalities,” the agency spokesperson wrote.

Later the same morning, CBP said they stopped a boat off the coast of Point Loma and found 15 people on board, “all attempting to illegally enter the U.S.” They were turned over to U.S. Border Patrol.

On Monday, two people were hurt when they crashed a watercraft into the rocks near Cabrillo National Monument. That pair was also suspected of trying to enter the U.S. illegally, according to CBP.