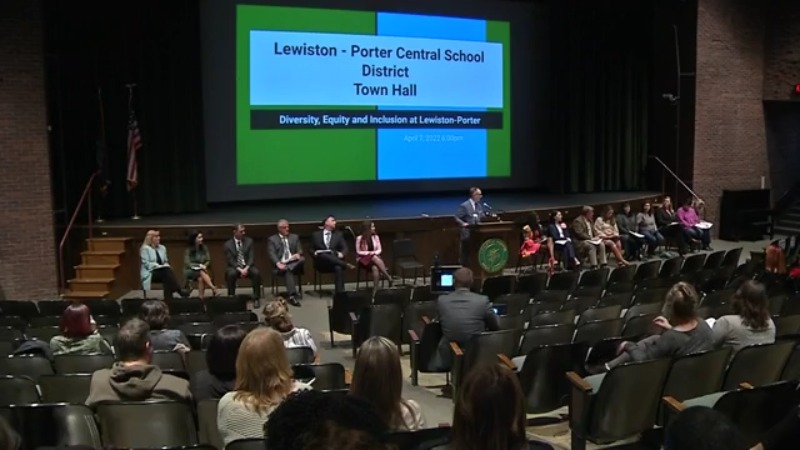 YOUNGSTOWN N.Y. (WIVB) — The Lewiston-Porter School District is tackling bullying and racism in its schools after multiple racially charged threats were made on social media targeting the middle school.

The district held a town hall for the community to talk about their concerns about racial and harassing behaviors between students in the district. People who attended Thursday night’s meeting at the high school say racism and bullying are prevalent inside the schools and have been for years.

“It sucks you don’t want to hear that it keeps happening. It’s happening all over the world. it’s hard to contain it so it know that it’s still happening in the school that I graduated at and future mixed, black and white, every child, can face it,” said Marlene Smith, who graduated in 2013. She was one of a dozen people who spoke up about her concerns in the district.

“There was quite a few racially targeted attacks in my time here at Lewiston Porter most of them for myself were on social media,” said one woman who got up and spoke to school leaders.

“Being a student and hearing it happen and seeing it happen is greatly disgusting,” one student said. “I want to see action being done and I want to be part of the change.”

School officials say tonight was a step toward making sure they address these problems to hopefully put an end to it.

“I do want our school community to know that when acts by some young people, unfortunately, raise themselves up to the most serious level. The criminal level we take that very seriously as well,” School Superintendent Paul Casseri said to those at the meeting.

Casseri says those threats shined light on a deeper issue within the district involving racial and harassing behaviors because the students arrested were allegedly framing a black student.

“We learned as a result of that, that our students of color, represents 9 percent of our student population many of them have felt through their lived experience they have felt some of this tension,” Casseri said.

He hopes this meeting was the start of removing that tension.

“We want all our students to feel safe, to feel like their welcome and to feel that they can be who they are and know they can come here and grow as human beings with who they are,” he said.

School leaders are asking for help from parents to end racism and bullying inside the schools. The district started an anonymous tip line for people to report any of those behaviors.

Sarah Minkewicz is a reporter who has been part of the News 4 team since 2019. See more of her work here.