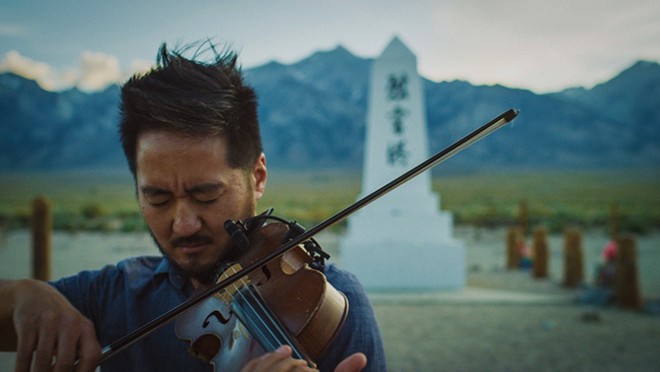 This article originally appeared in our sister paper, Cleveland Scene.

Prior to the 2012 release of Kishi Bashi’s debut album, 151a, Kishi Bashi (née Kaoru Ishibashi) played in the indie rock band Jupiter One. Finding it difficult to make even a subsistence salary with the band, he embarked on a solo career about 10 years ago.

To celebrate the 10th anniversary of 151a, Ishibashi and Joyful Noise Recordings have teamed up for a 22-track reissue that expands the original album by adding 11 corresponding demo recordings. The reissue also features new artwork by Hsiao Ron Cheng as well as a detailed track-by-track and liner notes by Ishibashi.

“Jupiter One was a struggle,” says Ishibashi from Virginia, where he was spending some time with his parents before embarking on the 151a 10th anniversary tour that brings him to the Delmar Hall on Thursday, April 7. “When I started the solo thing, I realized I could put on an effective show myself with loops and beatboxing, and I wouldn’t lose money. Four guys from New York traveling on tour was always a losing venture. That’s not a fun place to be.”

When he was ready to go the solo route, Ishibashi approached Joyful Noise Recordings, an Indiana-based imprint run by Karl Hofstetter, about releasing his very first album.

“Back then, it was just Karl, the president, and he had a buddy working for him,” says Ishibashi, who knew of the label because Of Montreal, a group with which he had recorded, worked with Joyful Noise. “It was barely a label, but [Hofstetter] had distribution. He paid for mastering and some of my mixing. We really hit it off. He was trustworthy, and he seemed to really care about music. He had just put out an Of Montreal box of cassettes. He was doing super hipster stuff. We built the label together and grew together.”

Beginning with an intro that includes a flourish and strings and synths, 151a immediately calls attention to Ishibashi’s ability to layer sounds and use synths and strings to create compelling pop harmonies.

“I like cinematic stuff,” Ishibashi says, adding that the album intro has become the “walk-out music” for the upcoming shows. “If given the opportunity to have an intro, I’ll do it. The album is like an experience, so why not do an intro?”

With their Beatles-like harmonies, songs such as “Bright Whites” and “Atticus in the Desert” have a real exuberance to them.

“I always like wild and fun things,” says Ishibashi. “That’s inherent. At the time when Jupiter One split up, I realized that when you’re not restricted to a band setting, you have a lot of freedom to go wild. I came up with a lot of orchestral stuff and exciting stuff that reflects my personality. I would like something that’s all over the place. It’s like going to a restaurant and having a bunch of different dishes.”

On some tracks, Ishibashi sings in Japanese.

“I wanted [the album] to be unique, and it’s also about coming to terms with part of my culture,” he says. “I wanted people to know I wasn’t just a white indie rock guy. Japanese is very rhythmic and to me is easy to use [as] an instrument. It’s like a marimba or something because it’s so rhythmic. I treated it as another texture. You can throw it on top of the English singing, and if you understand Japanese, it adds another element.”

Just last summer, “I Am the Antichrist to You” appeared in a scene of Adult Swim’s animated sci-fi hit Rick and Morty.

“They sent the script over and described the scene, and it said, ‘A song like Kishi Bashi’s “I Am the Antichrist to You.”‘ It was in the script,” says Ishibashi. “I think the guy is a fan. I was like, ‘Fuck, yeah.’ It’s one of my favorite shows. And then I had to keep the news quiet for months, which was torture.”

During the pandemic lockdown, Ishibashi wrote and recorded The Emigrant, an EP of twangy, bluegrass-y tunes that represents a musical departure.

“I was traveling a lot since we didn’t have tours,” Ishibashi explains when asked about the EP. “I had a camper that we rarely used. I had an awesome opportunity take it around the country. I eventually moved to Montana last summer. I just love the area. I took the camper up there, and it was a way to connect with nature and do something to keep me from feeling bad about not touring. I always thought I had imposter syndrome playing jazz and country. Then, I realized, it doesn’t matter. You can play whatever you want. Those are just insecurities. I wanted to play some bluegrass and folk stuff.”

Ishibashi says he’s excited to play 151a in its entirety on the upcoming tour. The tour will mark the first time he’s done that.

“We just never had the opportunity [to play the album in its entirety], so this will be great,” he says. “This will be a big, high-energy show.”