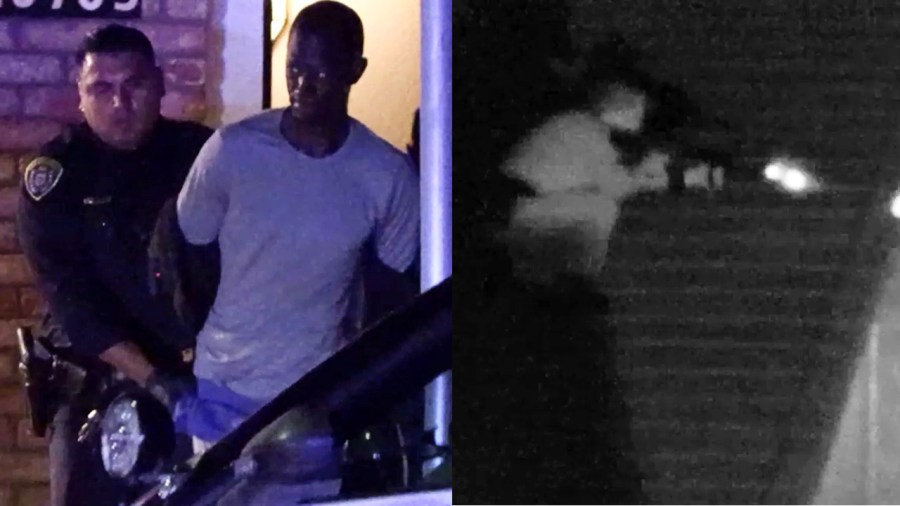 An officer and the burglar both fired guns as police tried to make an arrest, but no one was seriously hurt in the ordeal, a police captain told OnScene TV.

It all started shortly after midnight with two separate calls about a man in a van “prowling” the Tierrasanta neighborhood and potentially trying to break into houses, San Diego Police Capt. Rich Freedman said. When the department sent officers, they could not find the burglar after either call.

Then, shortly after 2 a.m., authorities got a third call from a home on Viacha Drive, south of Tierrasanta Boulevard. A resident said someone forced his way into her home, Freedman told reporters. The woman and her elderly father locked themselves in a room while they waited for help, but the man eventually broke down the door, according to police.

Freedman said the intruder threatened the residents, flashed a gun and that “there was an assault,” but he didn’t provide further details on the nature of that attack. The man then fired his gun, though he didn’t hit the woman or her father. The captain wasn’t immediately sure what the intruder intended to shoot.

When police heard gunfire, they moved inside the house, Freedman said. Around the same time, an officer positioned on the roof of a neighboring home shot into a second-story window. He fired about six rounds from a rifle, according to OnScene TV’s video.

Freedman said the man surrendered at that point, lying down in the room and allowing officers to escort the woman out of the house. She was badly frightened but able to stay on her feet as two officers rushed her away from the front door.

Police moved in and took the man into custody, placing him in handcuffs and walking him outside to a waiting law enforcement SUV. He was not hit by the officer’s gunfire.

The woman’s father was also able to leave the house safely.

The police captain said it was too early to determine what prompted the officer to fire. Officials will review body camera video and interview the officer.

The man arrested by police could face a variety of charges, Freedman said. The van he was suspected of driving around the area before the home invasion was reported stolen.