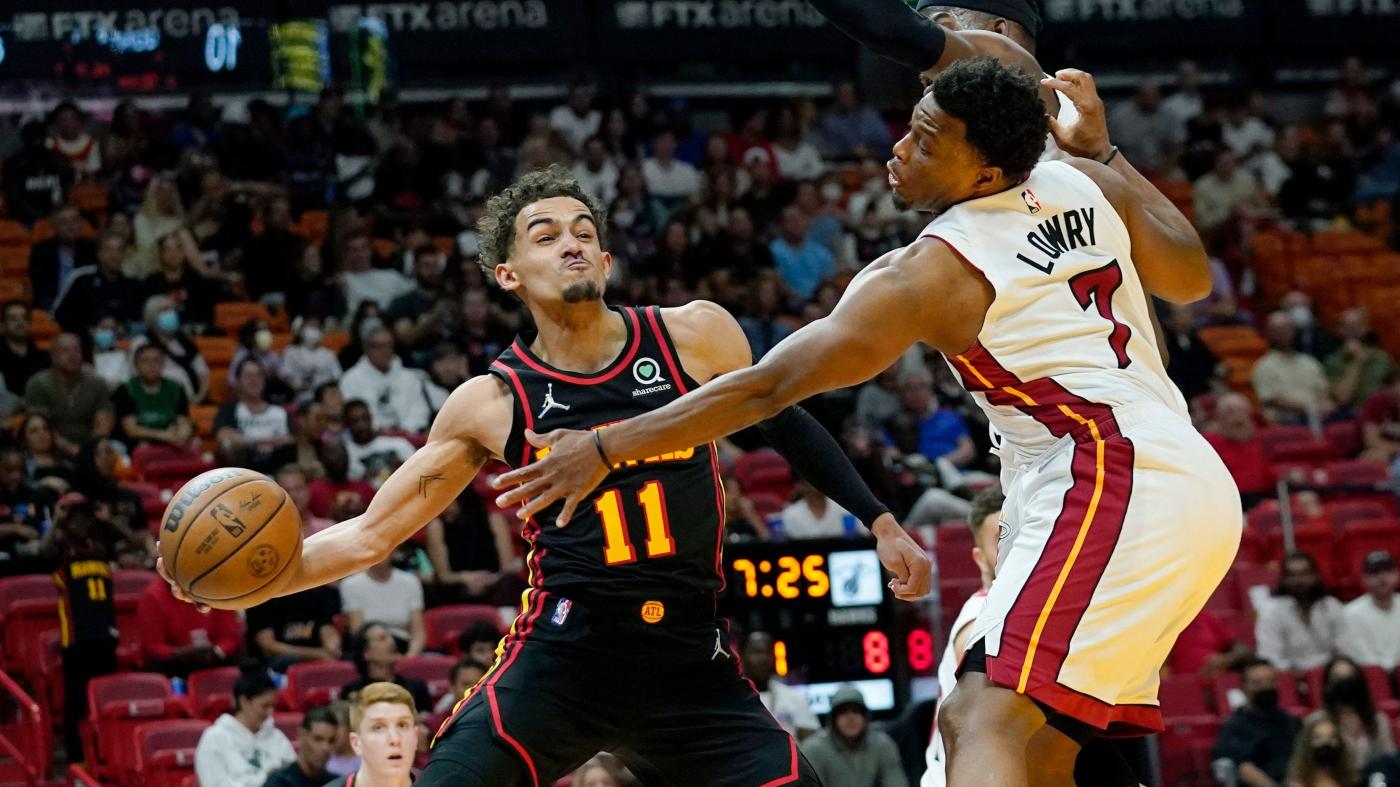 It wasn’t a dress rehearsal, considering there will be a full week for practice before their postseason opener.

And it wasn’t played for seeding, with the No. 1 spot in the Eastern Conference playoffs secured a night earlier.

Friday night instead merely was a moment to create one more night of regular-season magic at FTX Arena.

On that count, another mission accomplished, with the Heat pushing to a 113-109 victory over the Atlanta Hawks, a team very much playing for seeding position ahead of Sunday’s NBA season finales.

“It’s for the fans, man,” center Bam Adebayo said. “We have incredible fans. I can’t wait to see what White Hot [the Heat home playoff theme] looks like.”

What the Heat achieved in their home finale was providing ample reminders of how they got to the top of the East, and what could be ahead.

“It was great just to find a way to gut out a close game, a competitive game,” Heat coach Erik Spoelstra said. “If I could have scripted it, this is what it would be.”

The Heat, now on a season-best six-game winning streak, close out their regular season Sunday at the Amway Center against the Orlando Magic, with Spoelstra expected to hold out his regulars.

“We didn’t want to take too many days off until the playoffs,” Herro said.

“I got a friendly bounce,” Herro said. “Shooter’s touch.”

A missed Hawks 3-point attempt later, Herro got to the line with 5.7 seconds left, draining both for a four-point lead, effectively ending it.

“We just wanted to come out there and play,” Lowry said.

2. Playoff focus: With the Brooklyn Nets holding on to defeat the visiting Cleveland Cavaliers 118-107 on Friday night, it moved the Nets to No. 7 in the East, needing only a victory on Sunday over the visiting Indiana Pacers to clinch the No. 7 seed.

The Heat will play the No. 8 seed, which will not be determined until next Friday, in a best-of-seven series that opens a week from Sunday at FTX Arena.

Should the Nets exit the play-in round at No. 7, the Heat’s first-round playoff opponent would be the Hawks, Cavaliers or Charlotte Hornets.

Spoelstra said he is leaving play-in scenarios to others.

“I was never good at math, and had everybody explain all the different scenarios,” he said. “That’s when you lose me in 30 seconds.

“It will play out the way it was supposed to play out.”

3. Attrition concern: With the Heat opting to play it out with their primary rotation, they wound up losing a member of their power rotation for the second time in as many games.

Three nights after starting power forward P.J. Tucker was lost with a strained right calf in Tuesday night’s home victory over the Hornets, backup center Dewayne Dedmon limped to the locker room with 8:50 left, after going to the court during a defensive scramble.

Dedmon had been questionable going in, with sprained right ankle.

The Heat already were without third-string center Omer Yurtseven, due to a non-COVID stomach illness.

Spoelstra said Dedmon could have returned if needed.

“I knew pretty quickly that he was just going to get re-taped,” Spoelstra said. “He was just getting his ankle re-taped and he was actually available if we needed him.”

4. Trae bien: If this was an attempt by the Heat to send a message to Young in advance of a potential playoff matchup, it was a mixed message.

It was the NBA-leading 29th time this season that Young has scored 20 or more in a half.

The Heat opened with Caleb Martin defending Young, but basically switched everything when they weren’t bringing a second defender.

“We were trying to disrupt Trae as much as possible that second half,” Heat guard Gabe Vincent said.

5. With meaning: Spoelstra said it is important to appreciate winning the No. 1 seed, which the Heat clinched Thursday.

“It does mean something,” he said. “I think you can take gratitude from that and gratification from a meaningful regular season. It’s not everything, but it definitely is something. And I think it’s always good to shoot for something in this league, and to compete for something.”

Spoelstra said it all comes down to perspective.

“It wasn’t something that we were talking about every single day,” he said, “but we talked about learning how to win, and to do it without excuses, and to do it with a lot of different things that are coming our ways this year, and the adversity and guys in and out of the lineup.”