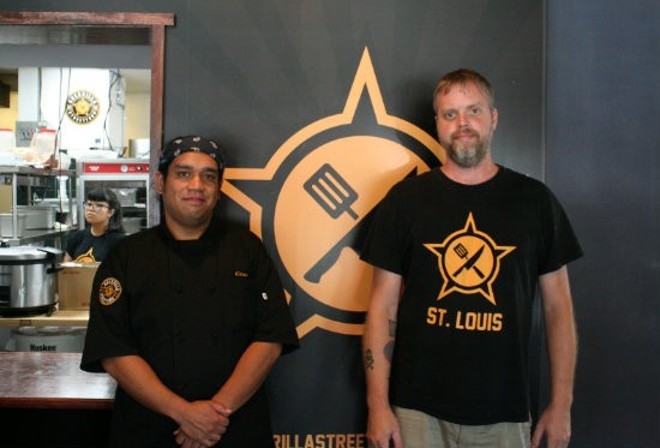 Eleven years ago, Joel Crespo and Brian Hardesty set out on a mission: To be pioneers in the city’s nascent food truck scene by introducing St. Louis diners to modern Filipino cuisine through their brand, Guerrilla Street Food (43 South Old Orchard Avenue, Webster Groves; 314-274-2528). Now, after over a decade defined by success on both those counts, the business partners are ready to step away from their beloved food truck and brick and mortar and are looking for a buyer to carry on their legacy. If they do not find one, both the truck and storefront will close following service on April 30.

Crespo and Hardesty made public their intent to sell Guerrilla Street Food on April 6, citing their desire to pursue other endeavors as the reason for their decision. As Crespo tells the Riverfront Times, the food truck and Webster Groves storefront remains highly profitable, and he is confident that this is a fantastic opportunity for a prospective buyer.

“I believe there is an opportunity here for someone to walk into this business model,” Crespo says. “It’s a well-oiled machine. The pandemic forced us to pivot in a way that made us a very efficient kitchen. We really worked out all the kinks to where now, someone could just walk right in and continue business.”

Hardesty echoes Crespo’s sentiments. Citing the brand’s steady popularity and deep reputation within the St. Louis food scene, he says that the right buyer will be inheriting a robust and profitable business. As part of the sale — something both he and Crespo refer to as a “bargain” — the buyer will gain the brand and trademarks, a 30,000 strong social media following, an email list of 10,000 addresses, all recipes, intellectual property, equipment, the food truck, and the revenue stream for the current business. Crespo and Hardesty both say that they will also offer their assistance during a transition period as part of the deal.

The situation is bittersweet for the partners, even as both express their desire to move forward with other endeavors. Hardesty is excited to be able to fully focus on his work with 9 Mile Garden food truck park, and its forthcoming spinoff, Frankie Martin’s Garden in Cottleville. Crespo looks forward to taking a break from an industry that has seen significant tumult over the past few years, and he teases that he may remain in the food business or pursue opportunities in his former field, radio and television production.

However, Crespo and Hardesty see Guerrilla Street Food as deeply personal, and cannot help but get emotional when they talk about what it means for the brand if they do not find a buyer.

“It’s our baby, and there are a lot of emotions, but we feel like it’s necessary,” Crespo says. “The best case is that the legacy lives on. When we shut down our other locations, we had so many people come in and say, ‘Thank god you still have this one, because you mean so much to us.’ We have a cult following of regulars and students who eat here once, twice, three times a week, which is what we wanted to do: create a place that was accessible enough for it to be a spot for people.”

Hardesty notes the impact that the brand has had on the St. Louis dining community over the years, especially in helping to establish its now-thriving food truck scene. As one of the first trucks to operate in the city, he is proud of Guerrilla Street Food’s legacy as building the scene into what it is today by establishing a roadmap for those who have come after them. He is also proud that the brand helped shine a light on Filipino food in St. Louis, a style of cuisine that he is excited to see thriving through other brands in the area.

For Crespo, a Filipino-American, that factor is especially personal.

“We have a lot of Filipinos and Filipino-Americans who connect with us and relate to us,” Crespo says. “Many have a similar background to me, and they don’t necessarily have a lot of places to learn about their culture. I didn’t either, and through this restaurant, I was able to have my own journey. This was my gateway, and we became that touchstone for other people to find that as well.”

As Crespo further explains, Guerrilla Street Food occupies a unique place in the Filipino consciousness here in St. Louis because it celebrates the experience of being a Filipino-American in the Midwest. He is eager to sing the praises of his fellow Filipino businesses in town and has been excited to watch them thrive. Still, he can’t help but feel that, even as others grow and expand the cuisine, Guerrilla Street Food remains a vital part of that story.

“We do something unique, in that I am a Midwestern Filipino-American on a journey of reconnecting with my roots; our food is an expression of that,” Crespo says. “It’s a unique voice, and I get messages from people all the time that make we warm and fuzzy. We didn’t necessarily set out to do that, but as I became more knowledgeable, I wanted to share that knowledge, and it organically became something. That’s why I don’t want Guerrilla Street Food to end. I want it to still be here for all of those people, because it wasn’t there for me. I had to make that sort of thing because it didn’t exist, and it’s important.”

Crespo and Hardesty are both optimistic that they will find the right person to carry on their brand’s legacy, though they are prepared to say goodbye even without a buyer. They know that scenario would be difficult for their loyal patrons, some of whom regularly drive in from Cape Girardeau, Illinois and even Arkansas to get a taste of their favorite restaurant. They are grateful to those who have supported them over the years and believe that is their legacy — creating a beloved brand and helping to spur a food scene that will live on, with or without Guerrilla Street Food, for years to come.

“We’ve had our ups and downs, but we are a survivor,” Hardesty says. “I feel like we are important and have made a good impact on the St. Louis restaurant scene.”