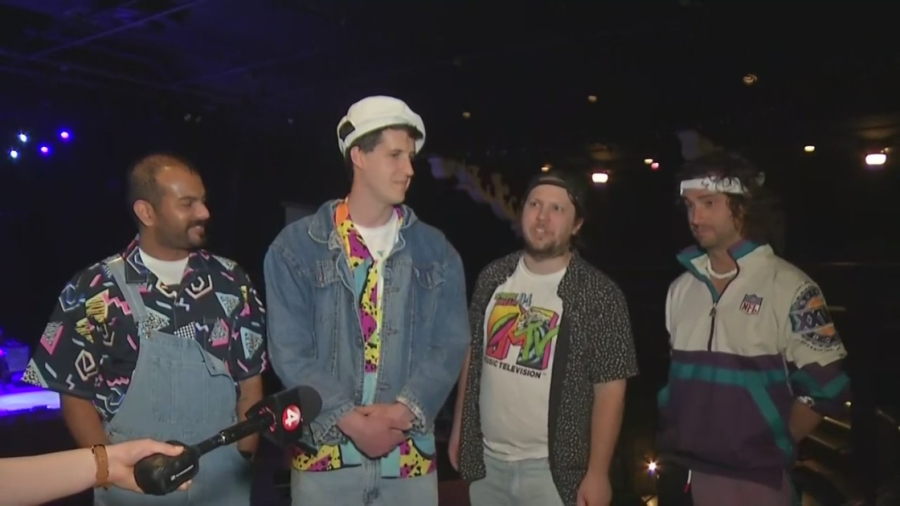 BUFFALO, N.Y. (WIVB) — If you walked down Main Street Saturday night, you were transported back in time. From people wearing fanny packs, to artist hats, to flannels, Buffalo spent a few hours celebrating the ’90s.

The city took it back to the days when music was still on MTV, as the “World’s Largest ’90s Party” featured songs from Britney, the Backstreet Boys, Nirvana and more. Mayday Buffalo provided the entertainment at Town Ballroom with a lot of ’90s hits.

The fashion choices of those in attendance included denim-on-denim, neon outfits and grunge-inspired looks.

“Definitely, the ’90s were an eclectic mix of fashion, cartoons, music and everything in between,” Jay Crowe, bassist for Mayday Buffalo, said. “So definitely a hodgepodge of everything. And we are ready to bring that tonight, and that energy tonight.”

Mayday Buffalo performs on Wake Up! ahead of World’s Largest ’90s Party

The band members said the decade holds a special place in their hearts, because it’s when they grew up and fell in love with music.

“I think everyone holds the music in which they grew up with — it’s a little bit special for them and nostalgic,” Mick Wolcott, frontman for the band, said. “And I think that’s the ’90s for us, and for the people who come and see us.”

This year’s event was years in the making. It was a sell-out in 2019, and was planned to return in 2020, but was canceled because of the pandemic.

“It’s been sold out for two years,” Artie Kwitchoff, owner of Town Ballroom, said. “That’s pretty funny. It shows that people are really excited about it.”

For many who came out to the Theatre District, they celebrated the ’90s, remembering the good old days of Full House, the Spice Girls and pagers. Though they may have swapped their Walkmans for iPhones and Zimas for seltzers in the years since, the Buffalo crowd immersed itself in the nostalgia Saturday night.

Lynn Gugino of North Tonawanda shared some of her favorite ’90s shows.

“Obviously ‘Ren and Stimpy’ and all of the cartoons, ‘Hey Arnold!,’” she said.

David LeBron of Buffalo shared his ’90s experience, and took pride in some events of the decade that happened prior to him even being born.

Tara Lynch is a Buffalo native who joined the News 4 team as a reporter in 2022. She previously worked at WETM in Elmira, N.Y., a sister station of News 4. You can follow Tara on Facebook and Twitter and find more of her work here.